Why LUNA cryptocurrency hit the news 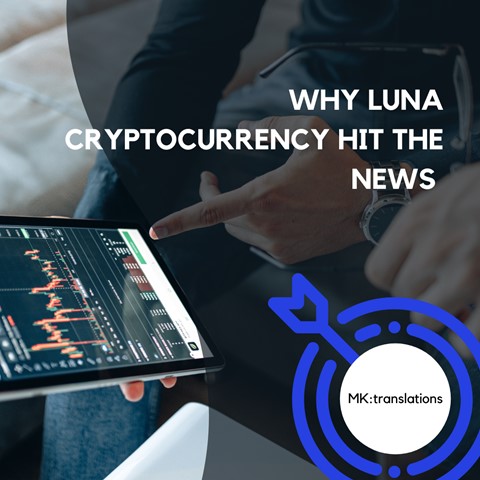 The financial world was hit by news these days – the Terra LUNA coin, which was one of the ten largest by capitalization in April, has fallen to its all-time low – $0.00001.

Read also How to Earn with NFT

What is Terra LUNA – cryptocurrency or token

LUNA is actually its own Terra blockchain protocol token, which provides stability to the price of Stablecoins. LUNA is burned with an appropriate value to produce stable coins. At the same time, LUNA is the main asset of the entire Terra network.

A token is a virtual unit replacing digital coins, that is, some kind of analog of a stock on a stock market. Tokens are issued to raise project funding, credit and monetize additional services.

In the article, we sometimes refer to LUNA as a cryptocurrency rather than a token, since most of our readers are new to the cryptocurrency world and perceive LUNA that way.

Connection of Terra LUNA crypto and the UST stabelcoin

TerraUSD (UST) is a decentralized Stablecoin from Terra. It is pegged to the exchange rate of the U.S. dollar, but is not backed by it in accounts. Its exchange rate is stabilized through the issuance and burning of LUNA. To issue 1 TerraUSD, a reserve asset (LUNA) of $1 must be burned.

The advantage of UST is the independence of its emission from the developer’s will – one cannot issue more coins to cover any kind of expenses. And the main disadvantage is associated with the relative stability of the whole system – in case of a mass sale of the cryptocurrency, the parity with the dollar can be broken, which will lead to the fall of the rate and devaluation of stabelcoin.

Is Terra LUNA really a SCAM?

The catastrophe began on May 8 – an unknown seller sold UST at once for $300 million. The market panicked. For some time market makers tried to moderate the rate of Stablecoin by selling crypto-assets.

But this didn’t save the situation – UST was detached from the U.S. dollar, which led to the collapse of LUNA. Investors lost tens of billions of dollars.

The reason is the algorithmic mechanism of UST stability – when the exchange rate drops, the excess tokens are burned in exchange for the issuance of Terra LUNA coins of the same value.

The lower the LUNA coin price, the more coins are issued.

In this situation LUNA was equated with SCAM. This is the name of a scam on the Internet when, for example, some investment project has stopped payments and shut down. Especially since Kwon, CEO of Terraform Labs, had already been involved in a similar botched project with the Basis Cash algorithmic stabler.

Still, whatever the case, the panic mood has affected the entire cryptocurrency market – even the price of Bitcoin has fallen 11% in recent days.

What are the Terra LUNA new today and will happen next?

Terra has already aanounced their plan to raise $1 billion in additional investment and is preparing a plan to protect the stability of UST and the Terra ecosystem as a whole. They plan to relaunch 1 billion tokens with this distribution:

However, crypto investors are cautious about such announcements, accusing the Terra team of irresponsibility. In addition, information from researchers at Elliptic has emerged. They claim a reserve fund to be designed to stabilize the UST exchange rate allegedly mysteriously disappeared instead of helping the coin save itself. Two transactions were recorded on the Gemini and Binance exchanges, after which traces of the money were lost. The conspiracy is blamed on international investment firm BlackRock, hedge fund Citadel Securities and cryptocurrency exchange Gemini. At the same time, the representatives of these companies call the accusations far-fetched.

Therefore, the future fate of UST and LUNA stablocoin is unknown. The forecasts are not very optimistic – analysts assure that due to the lost reputation, the possibility of restoring the project to past performance is extremely low. Otherwise, everything is possible, so let’s wait for further LUNA coin news.