How do national characteristics affect game localization and app software? 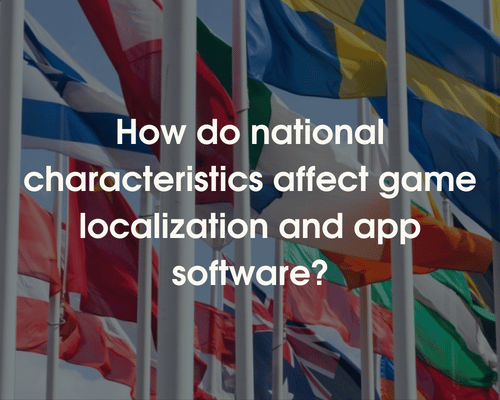 Even the most fascinating game or the coolest app software won’t resonate in the hearts of foreign users if you ignore the localization stage. That is, you are not adapting the product to a specific country’s market.

Although the localization of the app software itself does not guarantee success in the international market, because it is not its presence that is important, the quality of its implementation.

In addition to high-quality translation and an experienced team, the formula for effective game localization also includes one component that determines the final version of your product. It is all about national taboos.

Let’s consider what features exist in different countries and why it is important to take them into account so that not to incur the disfavor of local society and users.

Perception of color in different cultures

For instance, in our culture, blue is associated with the sky or water, but in Iran, it is a symbol of sorrow.

In Europe, yellow is an invigorating sunny, summer color, in China, it is a symbol of the imperial family, and in Egypt, it is the color of funeral processions and sorrow.

In Great Britain, the color culture is closely connected with the monarchy, and the “royal” colors — purple, blue, red, and green — are considered national. However, in China, green has a negative connotation because it is associated with treason.

White has also been ambiguously interpreted in different cultures. In our country, it is a symbol of purity, virginity, and the principal color of weddings and celebrations. And in Cambodia, people don’t even wrap presents in white, because for them it is the color of sorrow.

There are many such examples. Therefore, when creating your design from the outset or already at the localization stage, remember that traditions from different cultures often contradict each other. A color palette that would evoke positive emotions in a Ukrainian might offend or even anger residents of other countries.

Each country’s culture has been shaped by its history and past experiences.

So don’t expect the Germans to be grateful if your game hints at their country’s “dark” military past. The Wolfenstein developers not only had to change certain elements of the game, replacing the swastika symbol with neutral ones but even distorted Hitler’s image, making it less recognizable of its mustache lack for the German market.

Australia strictly monitors content for violence, sex, and drugs. If you don’t want to have problems, localize the app software to take these restrictions into account, so it doesn’t turn out like Disco Elysium by Estonian studio ZA/UM, which was not allowed to be released due to a drug demonstration.

Another example is the game The Witcher 3. It contains all the taboos of Eastern cultures: naked women, alcohol, mystical beings, and gods. Therefore, for the Arab market, the developers had to do some serious game localization, dressing up the women, and replacing references to the gods with notions of “universe”, and “destiny”. Avoid aw well the words “creation” and “great”, because they are associated with Allah.

Localizing the app software for China can fail if you choose the wrong language or mix vocabulary from different dialects. There are three varieties of Chinese:

Therefore, depending on the target region of the game’s distribution, choose also the translators to localize the game. Should we mention that they must be native speakers?

Fonts and text length are another problem. A sentence in one language can take up much more space than one in another. The text direction may also change. Thus, the shape and size of buttons, windows, and menus will have to be changed.

Religious images and themes are often used in modern games. A typical example is the game Bible Adventures. It is based on three stories from the Bible: Noah’s Ark, the rescue of baby Moses and David’s duel with Goliath. But would members of other religions be interested in such products?

Attitudes towards foreign religions and how they are interpreted in different cultures is a delicate topic that can be troublesome for developers when entering new markets.

In 2001, the Saudi authorities banned the Japanese game Pokémon for “promoting Zionism and gambling prohibited by Islam”. The same situation was repeated in Mexico, Slovakia, and Turkey.

In addition to the above factors, there are national holidays, subtleties of humor, seasons in different hemispheres, and many more things to consider when localizing games. There are many promising markets, but each of them is special. That’s why they must be approached individually. This is the only way to achieve success and recognition with your product.

Features and difficulties of literary translation

Challenges in games localization and bringing to Chinese market